Despite the stiff wind blowing the snow nearly sideways, four nesting pairs of cardinals perched at the feeder this morning, bright daubs of red against the pine tree’s frosted boughs.

Once again, we mark the pause at the bottom of the year. With the farm so still, I can almost feel the earth tilt its face back toward the sun, just as I, in this silence, bend my mind toward spring.

For a while now, I have been keeping my eye out for an old Planet Jr. push seeder. When I got word that a used farm equipment dealer up in Grant had a couple in stock, I made a point of going up there this week and buying one.

The Planet Jr. is a drill-type planter, a category of mechanical implements that allow the farmer to sow seeds in designated rows at specific rates and depths, which reduces waste and increases crop yields. (Thank you, Jethro Tull — no, the other one.) The Planet Jr. version is simple and effective, and the scale of the push model is correct for the size of this farm. 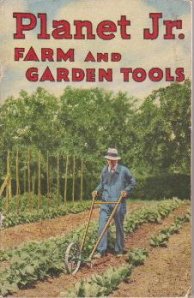 The Planet Jr. and other tools manufactured by S. L. Allen and Company were originally targeted to market gardeners and “one-horse” farms in the early years of the twentieth century. As the scale of agriculture increased after World War II, the market for these tools steadily shrank, though it never disappeared. Planet Jrs. continued to be manufactured — you can still buy new ones today — and the original design has remained essentially unchanged.

As smaller-scale farming rebounds, these old seeders are making something of a comeback. Many of the growers I know swear by them. I will use mine to plant crops such as greens and beans, beets and carrots, turnips and radishes and the like, and it will be far more efficient than doing so by hand and hoe.

Push seeders like the Planet Jr. belong to a class of tools — including wheel hoes and over-the-shoulder broadcast seeders — that modern agriculture has left behind but that remain effective for the small-scale grower. And the old ones were built to last. You can still find them around and, with a bit of elbow grease, put them back to work. I have to confess that I like these tools not only because they still work but also because they remind me that sometimes latest and greatest, new and improved does not always beat old-school tried and true.

Why, there are ten great reasons right here. One of my favorites:

Have you ever eaten a sunchoke? How about tossing some fresh purslane into a salad? When you read the word “sorrel,” does a lemony flavor come to mind? Broaden your palate by joining a farm. The farm gives you a bit of everything it grows, which often includes a few things you may not have heard of. This is a great way to find your new favorite vegetable.

If you are interested in joining a CSA for 2014, please consider Blackbird Farms. Thank you!

We are sold out of CSA shares for our 2021 season. Thanks so much to everyone who has already signed up! If you are interested in being placed on a waiting list, please contact us.

Can you believe these cauliflower? We can hardly contain our joy and excitement for them.
...And harvesting all the lusciously large and magical beauties.
Sneaking peeks at beautiful baby cauliflowers...